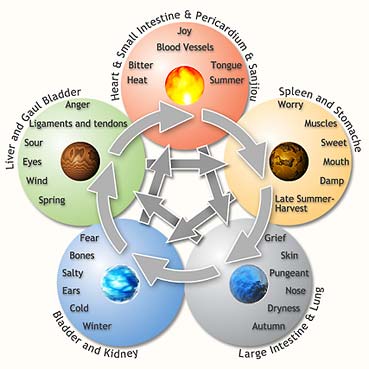 The movement of the elements; Wood, Fire, Earth, Metal and Water, shown always in a circle, depict the phases of growth and decline inherent in all living processes. These cycles are seen not only in the human body but also in our environment.

Perhaps the easiest way of understanding the Five Elements is by looking at the seasons.  Wood is associated with Spring, with early emerging growth.  Fire with the activity of Summer.  Metal is connected with the gradual declines of Autumn and Winter with Water, as all of nature retreats and rests.   Late summer and harvest are akin with Earth which is also connected to the turning points within the year signified by the Equinoxes and Solstices.

The Five Elements describe the conditions of change that govern life.  They continuously create one another and are dependent on each other.  It is said that Water is the mother of Wood, Wood is the child of Water and the mother of Fire, the Creator and the Created. This ever moving cycle is based on the relationship between each element with each one functioning in accord with another.

The Five Elements depend on one another for balance.  Each element acts on another ensuring that no single element can grow out of proportion to the others. In the Control cycle, each element has the capacity to overpower another.  For example Metal controls Wood, like the axe taken to a tree, metal has the capacity to diminish wood.  Water controls Fire, its watery nature carries the power to extinguish fire if needs be.

Any healing method based on Chinese Medicine such as Shiatsu or Acupuncture looks at the way these elements are functioning within the body and aims to adjust the balance of the elements in order to reach and maintain equilibrium which in turn gives rise to good health and wellbeing.