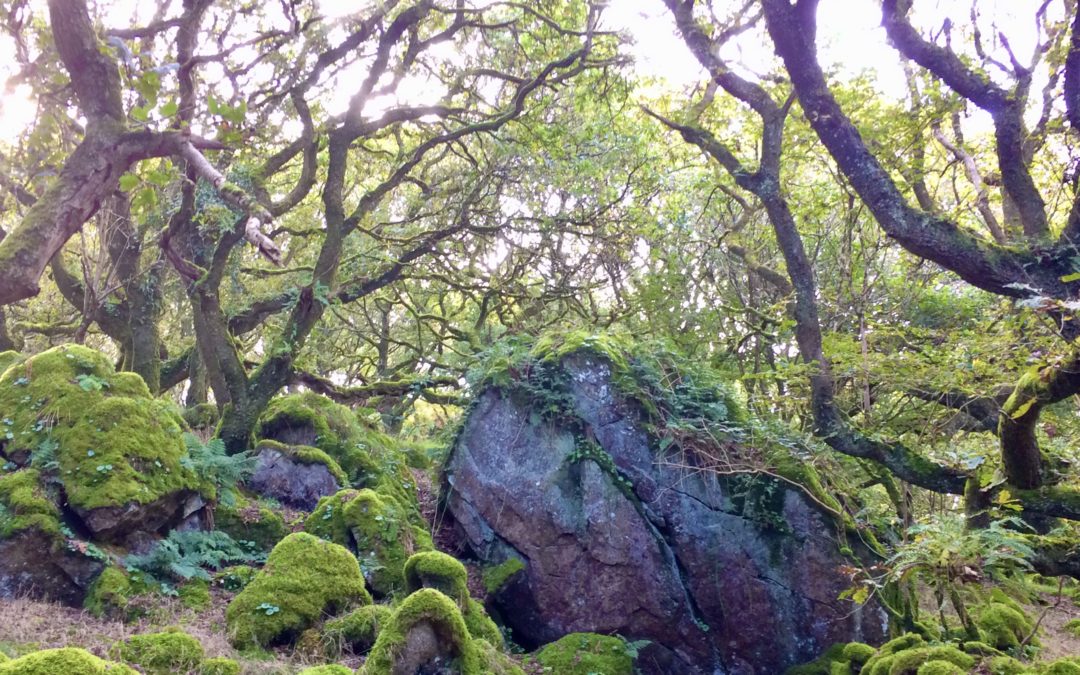 In the ‘Web of Wyrd’ Brian Bates describes a world in early Christianised Britain, where the remnants of a perceptual magical world remained.  Often referred to as the Dark Ages, this was the time of King Arthur and Merlin.  Of Avalon and magic.  The post Roman landscape of Britain was a far cry from the Nature based understanding of life that emanated from the wisdom of the land rather than the four walls of the temple.  The Druids, male priests of a time before Roman rule and holders of the lineage of ancient wisdoms favoured groves, sacred outdoor spaces, often surrounded by circles of trees, or stones.  Theirs was a wisdom steeped in the wild, in the knowing that Nature is wise enough and in entering her realm all could be accomplished.

The everyday peoples lived in a landscape imbued with magic and symbolism.  It was a time when the veils were still thin.  People’s consciousness kept alive the pathways between the worlds, belief maintained their reality.  It was a time of change, a leadening of consciousness.  A necessary closing of the doors so that for a period of time, man and woman would become lost, cut off from their essential human power, and instead project this onto a singular person who would become the interface, not between man and nature but man and God.  And one God at that.  Collectively, for the last thousand years or so, our souls have chosen to move further and further into separation.

The arrival of the Roman’s began to change the largely feminine landscape, and perceptual mind of the people into a mind more akin to logic and rational thinking.  Physically this new consciousness began to be etched onto the landscape.  Paved roads began to be built in straight lines, by slaves, which cut through the landscape completely ignoring the network of organic pathways and lanes that had naturally been contoured into the earth by thousands of years of animal and human passageway.

Anyone who has lived on land knows that paths have a tendency to change route year on year.  Naturally and organically one’s feet begin to walk a slightly different way, maybe the land becomes waterlogged, or a bunch of mole hills pop up encouraging a slightly new trajectory over the earth.  Paths do not generally run in straight lines, rather they follow the natural ebb and flow of the earths contours.  This serves an energetic function as well, allowing energy which is in constant flow over the earths crust to move and mould, slow down and be gentle.  Simply to flow.

The straight paths of the Romans changed this and instead energy began to move much faster, with no curves to slow it down, the new roads became runways of speed encouraging those on them to move faster.  They were known as dragon lines and the local people shunned them, feeling afraid of the new energy they could sense intuitively entering their lives.  Tuning in, I feel an energy that increases in force, of hard line beliefs, of a move towards greater rigidity.  As opposed to the soft, natural organic roads and byways that had developed over time, in accord with Nature.  These pathways, whether cobbled or not, have another quality, a blending harmony that neither imposes or detracts from the earth herself.  These paths have arisen through a symbiosis of human, animal and earth.  The Roman roads began in contrast to control Nature.

And with this control, the Divine feminine that imbues her consciousness throughout all of Nature began to retreat.  But this was a liminal time.  Change was afoot but her magic still existed alive, in people’s everyday consciousness.  Magic was not a separate thing, it existed as an under-current, just out of sight, weaving it’s web through the thoughts, beliefs, stories of the land, tribes and culture.    It disappeared from view for a time, but now it is re-emerging.  The veils are thinning again, the magic is yet again rising, the way is opening.  We stand at the threshold of a new way of being in accord with the wisdom and magic of Nature herself.  Of the Divine.  We are the weavers of this magic.  Bringers of a new way where we live naturally between worlds, free travellers of all dimensions and the wayshowers of a new life here on earth.