What is Schumann Resonance (SR)?

For the last 200+ thousands of years, humans have been exposed only to natural radiation such as Schumann Resonance, sun and thunder radiation, and some geological radiation and our bodies have adapted to it. But in the last 10 years only, according to Olle Johansson, PhD, Associate Professor in Neuroscience at the Karolinska Institute, Sweden, we’ve increased the exposure to the man-made radiation quintillion times more – that is 1 000 000 000 000 000 000 times more! (18 zeros) 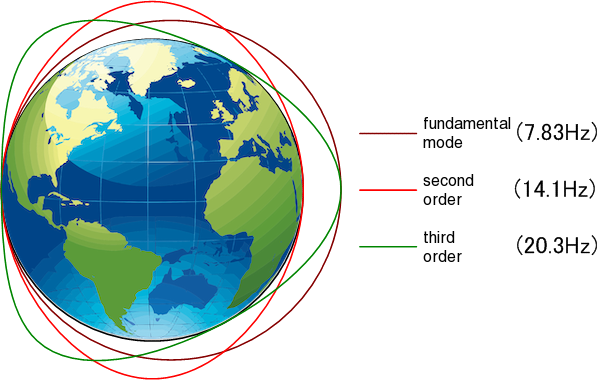 You can see the day to day measurements of Schumann Resonance on this Russian website. Some people suggest that Schumann resonance of the Earth has shifted to 35Hz or more but as you can see below it has been consistent with the original recording done by NASA in 1962.

Brainwave states and Schumann resonance of 7.83Hz
7.83Hz frequency falls within the range of natural human alpha brainwaves which is an optimum state for well-being and healing. Helios3 is a Schumann Resonance generator, producing a frequency of 7.83Hz (sometimes called Schumann Wave or Earth’s heartbeat) which soothes the brain so your brain gets the same benefits as when you sleep in geopathic stress-free zones and with no electro-smog or when you’re grounded, walking barefoot on a beach or grass.

The alpha brain waves help with depression, anxiety and insomnia
New and real evidence suggests the connection between Schumann resonance and our brains which produce the same frequency in the range of 7.83Hz when relaxed and healing. In short, the alpha waves tell the body to reduce pain and start the healing process. The NHS trial in Leicestershire, UK tested the Alpha-Stim aid device which is based on cranial electrotherapy stimulation (CES) and sends tiny electrical currents via earlobes to boost the ‘alpha waves’ in the brain which can promote a relaxed, calm state. In this trial, 63 per cent of 161 patients in an NHS trial with a general anxiety disorder (GAD) who used the device the size of a mobile phone for six weeks, had achieved remission according to the Journal of Affective Disorders with comparable effectiveness to that of CBT (cognitive behaviour therapy). Richard Morriss, a professor of psychiatry at Nottingham University’s NHR MindTech centre, said, “Alpha-Stim CESS was more effective at achieving remission than expected. As well as improvements in anxiety, there were improvements in depression and insomnia.” The device costs £600 and if rented to patients it could save NHS about £540 per patient compared with existing treatments. The device is approved by America’s Food & Drug Administration. Three million people in the UK suffer from depression, and up to 5% of the population from generalised anxiety disorder (GAD), a long-term condition that can cause anxious feelings. The American maker of Alpha-Stim claims it has a cumulative positive effect and the NHS trials seem to corroborate that.

Helios3 Schumann Wave resonator is much cheaper and produces an ambient frequency of 7.83Hz so there is no need to carry a gadget – you can have the beneficial earth resonance in your home or workplace all the time.